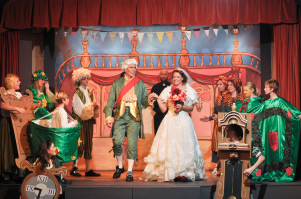 “A Triumph of Style and Ingenuity”

This was an excellent choice. The script by Ben Crocker remained faithful to the traditional story and its darker more challenging side whilst wittily and imaginatively integrating classic panto elements providing a richly varied range of characters. There were impressive individual performances but I was particularly taken by the genuine enjoyment and engagement of all the company throughout, whatever part they played.

Much of the laughter in the show depended on Felix, the decidedly French poodle, and his knowing canine sidekick. Bruce Ellis gave a bravura performance as Felix and Connor Hawes did his utmost to outshine him in his inventive and confident take on the mini poodle.

Anna Streather powerfully filled the role of the wicked witch Malabelle. She would have frightened us all had it not been for Matt Hood’s conceit of also providing the witch with a mini alter ego - which enabled Lucy Norman to shine as she mischievously parodied her mistress.

Lauren Moxom blossomed as Beauty, singing assuredly and playing her key scenes with the Beast with much sensitivity; an excellent debut performance with us. The Beast himself was played, in another terrific debut, by Craig Norman who amply filled the need to instill fear whilst laying bare (no pun intended!) the inner angst feeding his outward ferocity. Joel Teague made a handsome and affectionate Prince convincingly deserving his Beauty in the end.

Our central characters were aided and sometimes upstaged by the hugely varied supporting cast including village gossips - who also joined in the musical numbers with verve and warmth – ghosts, wolves, and the assembly of talking palace furniture and fittings who individually and collectively shone out as one of the high spots of the production. So many talented and stage wise youngsters!

Thirty actors taking some fifty parts presented a huge challenge to the wardrobe team, led by Anna Streather, the make up team led by Jenny Moxom and also the properties team led by Caroline Hallum  – including the talking, walking clocks created by Louise Banks. The result was a real triumph of style and ingenuity – everyone looked every inch their part – which added greatly to the quality and success of the production, as also did the colourful and imaginative sets designed and created by John Merritt, and special lighting effects created by Mai Targett and Hester Walshaw.

We all enjoyed a judicious selection of songs going with the grain of the story and engaging willing audience participation, helped along by the minstrels Graham Banks and John Billington.

So all in all a most engaging and enjoyable family village panto thoroughly deserving the large and appreciative audiences at each performance. A real feather in the collective caps of the production team including co-directors Matt Hood and Wendy Watson, and production manager Sharon Wayland - a job these days of poobah proportions. They may deservedly rest on their laurels for a little time at least!