The Regina Monologues - A Double First for The Lympstone Players!

Following the success of two sell-out performances at Lympstone Sailing Club, The Lympstone Players achieved a double first recently by performing at The Bikeshed Theatre in Exeter and raising £1,000 for SAFE, a local charity.

Directed by Wendy Watson, Regina Monologues by Rebecca Russell and Jenny Wafer was imaginatively staged in the intimate space of both venues. A striking set of gold and red drew the audience into the contemporary world of six wives, each woman commenting on living with a rich hotelier, providing a compelling, insightful parallel perspective on  Henry VIII, one of our most famous monarchs.

As the six voices told a different story, the themes of love, betrayal, sacrifice and survival echoed from the past through to the present. Lisa Gordon as Anna and Anna Streather as Cathy provided sublime highlights of great hilarity as dramatic counterpoints to the tragic loneliness of Jane played by Becky Gilfillan and the visceral anguish of the sixteen-year-old Katie played by Heather Redding. The haughty, controlled responses of Katherine, the last wife played by Claire Lawry and Grace Packman’s resigned and bitter portrayal of Annie enhanced the wives’ collective experiences of women, both past and present.

A profit of £1,000 was made on this production and donated to SAFE (Stop Abuse For Everyone), a local registered charity offering specialised services to those affected by domestic violence and abuse.

A Journey into our own Souls

by Rebecca Russell and Jenny Wafer

From start to finish this show sparkled with energy: a rollercoaster of a comedy about cruelty in which present-day parallels of Henry VIII’s six wives reviewed their relationship with a wealthy hotelier.

The six moved gracefully about the space (the small room of The Lympstone Sailing Club allowed for minimal seating for about 50) and the dictates of protocol and taste were broken down by Wendy Watson’s sparse staging (a gold cloth amply denoted wealth).  The pace was so fast we couldn’t stop ourselves from laughing at the disturbing bits. We were so easily taken in by Cathy’s dry assessment of her ex-husband’s failure to attend her wedding since he is 6 foot under that when we contemplated the horror of 16-year-old Katie standing begging her monstrous abuser for a towel, we were forced to question our attitudes to the place of violence in entertainment. Certainly several people approached SAFE (the charity for abuse victims) afterwards to discuss their own sad experiences.

It wasn’t just the juxtaposition of the comic and the tragic that proved such a success; the characters’ parts were comprehensively explored. Jane, dressed angelically in white, danced around delightedly as she prepared to bear him a son and Annie’s cutting cynicism visibly shrank as she realised she was going to be dealt with as she had dealt. Computer-dating Anna crossed and uncrossed her legs as she described her seduction technique, and masterful Katherine examined her fine wine as she spoke, barely tilting her head as though Henry was merely incidental to her comfort.

This was a team that knew and trusted each other enough to deliver an unselfconscious gynaecological and psychological account of lives destroyed by abuse. The unflinching clarity and uninhibited body language had us examining customs and values we have grown up with, and took us on a valuable journey into our own souls. 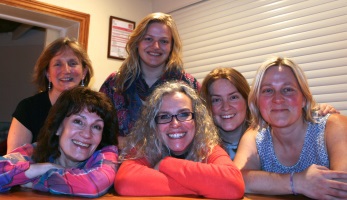