A Bit of History

On a dark night in November 1943, eight people gathered in the Church Room at Lympstone to form The Lympstone Players. [The minutes of that meeting say that it had been called to consider ‘the formation of an amateur dramatic society to fill the gap until the revival of the Lympstone Musical and Dramatic Society after the war.’ The pre-war group was never revived]. The first Annual General Meeting in April 1945 agreed the constitution and set the annual subscription at 2/6d (just under £5 at today’s prices)

The first production was in June 1945 “ The Dover Road” by A A Milne. It made a surplus of £7 (£270 at today’s prices) which was given to the Lympstone Nursing Association. Apart from being a charitable gesture this ensured that the Players did not have to pay Entertainment Tax! The first press review we have is for “Pot Luck” in 1947 – an evening of comedy music and dancing – in aid of the Village Hall Improvement Fund - plus sa change!

Since 1945 the Players have performed over 120 plays, pantomimes and reviews and provided many evenings of entertainment for members and their friends. Nearly all have been in the village hall but there have also been performances in our local Church, Sailing Club and in Exmouth as part of the One Act Play Festivals. Most recently, we performed at The Bikeshed Theatre in Exeter.

We do not have photographs of our earliest production, but starting with The Cradle Song in 1962, we do have some from most of our performances so have a look at our Gallery to see our history in pictures! 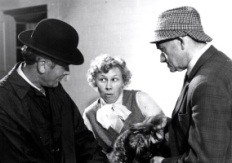